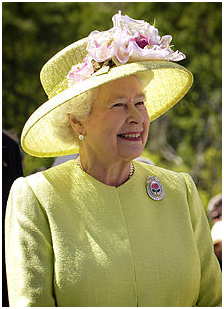 There are no prizes for guessing who this is! As you probably know, Queen Elizabeth II celebrated her 90th birthday on 21st April and it seems that England has become a party playground! Cannons have been fired, candles have been lit, flags have been waved, the National Anthem has been sung and trumpets have been blown. “How is this an idiom?” you might wonder…. Well, this isn’t an idiom, it’s what people do when they play trumpets. The idiom means something different.

Whether or not you agree with the monarchy, it’s worth noticing some important facts about her reign:

Through all this Elizabeth has been a quiet, dignified presence and has never blown her own trumpet! If you blow your own trumpet you boast or brag (vantarsi) about your successes and achievements. She is humble, has a great sense of duty and gets on with her job, despite problems and periods instability. She doesn’t blow her own trumpet!

Here are some other examples:

Have a relaxing bank holiday on Monday and we’ll see you next week!