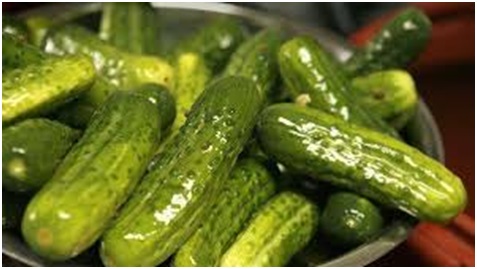 Last week’s idiom was inspired by the Queen’s 90th birthday and the day after, 23rd April, is generally thought to be the date on which William Shakespeare was born (in 1564) and also died (in 1616). Last week,23rd April, 2016 was therefore the 400th anniversary of his death. Even though Shakespeare lived centuries agowe still use some idioms that appeared in his plays, and yes, this week’s idiom comes from his play “The Tempest”, written in 1610, in which Alonso says to his servant Trinculo:

“How camest thou in this pickle?”

Whenever I hear the word “pickle” it reminds me of my Godmother, Margaret, who had a wonderful vegetable garden which she was very proud of. Everything she grew: tomatoes, onions, potatoes, salad, cucumbers, she ate! To preserve the onions and the cucumbers she “pickled” them – put them in vinegar, salt water and herbs, and stored them in a cool cupboard for a few weeks (“to pickle”). Her pickled onions and pickled cucumbers were famous in the neighbourhood! Nowadays, pickled cucumbers are called “gherkins” in British English and “pickles” in the USA and Canada.

The meaning of the idiom originates from the idea that the vegetables are stirred and all mixed up when they are pickled – so “to be in a pickle”means to be in a difficult position or to have a difficult decision to make!

Can you think of any situations when you have been in a pickle?