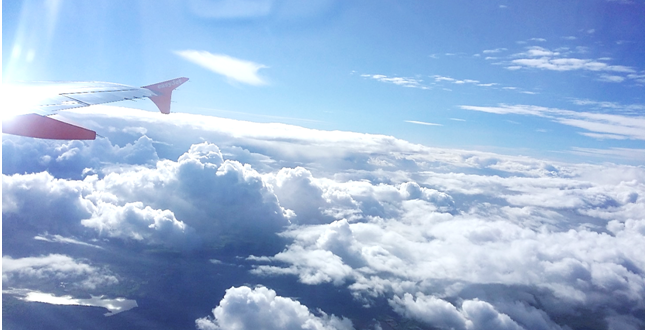 Air travel never ceases to amaze me! I think it is one of the greatest inventions of the 20th century.

The idea that you can leave home, get on a metal tube and fly through the sky for a few hours, then land in another country with a different culture, language, food and customs is mind-blowing (“strabiliante”).

Being above the clouds is in my top 10 of favourite places to be and I always take a lot of photos. Here is one of them, taken on a recent flight to Dublin. (My apologies to our Alitalia students since if you look carefully at the wing of the aircraft you can see I flew with Easyjet!)

Looking at my photos from the flight a beautiful idiom came to mind. I also have to thank one of our advanced level students, Stefania, for this as she mentioned it to me a few months ago. If you look carefully at the clouds in the photo they aren’t just grey or black, as people might often draw or think of them. The sun is always behind them and the clouds only temporarily block its light: they often look as though they have a silver lining – “unafoderad’argento”. When someone is having a bad time we often say this idiom as a message of hope – don’t feel too bad as difficult moments can often lead to better times! Here are some true examples!

When could or can you say “Every cloud has a silver lining…?” It’s such a positive, encouraging idiom, share it with us on facebook or send us a message!