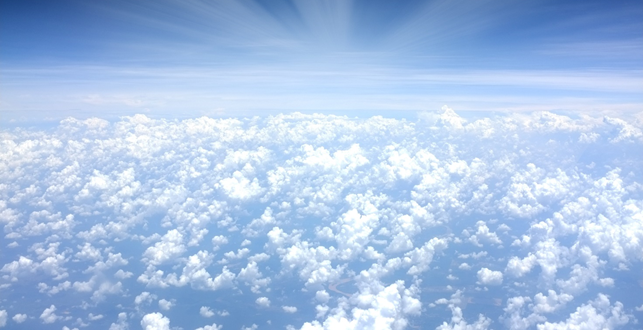 Have you ever looked up at the sky and been struck by some amazingly beautiful cloud formations? (“siete mai stati colpiti..?”) Or perhaps you have been flying above the clouds and looked out of the window in wonderment (“avete guardato fuori in meraviglia”)! Sometimes I stand in awe at the expanse and ever-changing nature of clouds and it makes me feel as though there is something greater that exists far beyond our imaginations.

The term “Cloud 9” was famously used as the name of an American fantasy radio show in the 1950s. The programme’s conductor would travel to Cloud 9 and once he arrived he would direct the cloud to strange and exotic places. Cloud 9 was starting to be associated with something extraordinary, something exceptional. In fact nowadays Air Ethiopia call their top business class Cloud 9!

Not surprisingly then, if you are on cloud 9 you are feeling euphoric, blissfully or exceptionally happy!

We hope there have been lots of occasions!

Have a good week,

…and now a more technical explanation:

The person most frequently identified as the father of modern meteorology was an English pharmacist named Luke Howard, who came to prominence at the beginning of the nineteenth century. Howard is chiefly remembered now for giving cloud types their names in 1803.

Howard divided clouds into three groups: stratus for the layered clouds, cumulus for the fluffy ones (the word means “heaped” in Latin), and cirrus (meaning “curled”) for the high, thin feathery formations that generally presage colder weather. To these he subsequently added a fourth term, nimbus (from the Latin for “cloud”), for a rain cloud. The beauty of Howard’s system was that the basic components could be freely recombined to describe every shape and size of passing cloud-stratocumulus, cirrostratus, cumulocongestus, and so on. It was an immediate hit, and not just in England. The poet Johann von Goethe in Germany was so taken with the system that he dedicated four poems to Howard.

Howard’s system has been much added to over the years, so much so that the encyclopedic if little read International Cloud Atlas runs to two volumes, but interestingly virtually all the post-Howard cloud types-mammatus, pileus, nebulosis, spissatus, floccus, and mediocris are a sampling-have never caught on with anyone outside meteorology and not terribly much there, I’m told. Incidentally, the first, much thinner edition of that atlas, produced in 1896, divided clouds into ten basic types, of which the plumpest and most cushiony-looking was number nine, cumulonimbus.
That seems to have been the source of the expression “to be on cloud nine.”
From “A Short History of Nearly Everything” by Bill Bryson
Share Post: