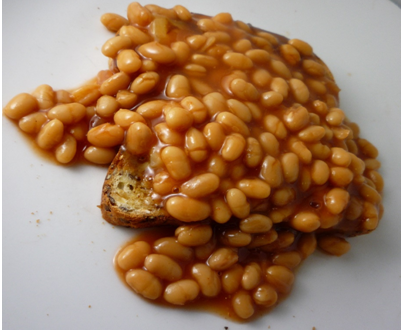 Have you ever eaten a full, English breakfast?

If you have, you’ll probably recognize these….. baked beans! They are haricot beans and although we say “baked” they aren’t usually baked in the oven, but stewed in a sweet, tomato sauce. In Britain they can be bought from any supermarket in a can or tin (“scatola”) and are a very common convenience food, usually served as part of a full English breakfast and also on toast as a snack. The best-selling brand of baked beans is Heinz and you can get these in some shops here now, but they are usually 4 times as expensive in Rome, even though I can’t really imagine Italian people would like them!

Talking of beans reminds me of Erina, my Canadian niece, whose mother-tongue is French. She’s now 17, but when she was 6 years old, my sister took her and her brother Tom to look at some beautifully-coloured birds in Toronto. Amongst the different species there were some talking parrots (“pappagalli”), and one bright green parrot in particular was really chatty and talkative. Erina had never seen a bird talking before….. she was absolutely stunned and turning to her Mum she exclaimed, “Look at that parrot Mummy – he’s full of beans!” My sister was really surprised that 6-year-old Erina who spoke mainly French, had just blurted out a popular English idiom!

If someone is full of beans, we mean that they are very energetic, excited and enthusiastic. The parrot was so loud and didn’t stop talking, so Erina correctly said he was full of beans!

Here are some more examples:

In what situations have you been full of beans?

Have a good week and don’t forget as part of your English education, try a can of Heinz baked beans!!